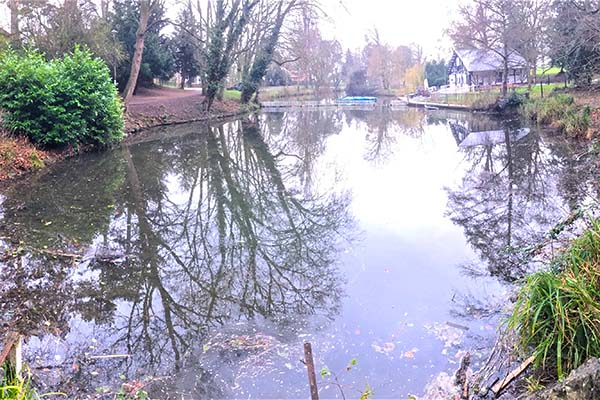 Pittville Park is the largest ornamental park in Cheltenham and features the magnificent Pump Room and lakes. This park is given a grade 2 listing under the English Heritage register of historic parks and gardens, with the Pump Room as a grade 1 historic building.

Pittville Park won its first Green Flag Award and Green Heritage Accreditation in 2016 and still flies the flag today. The Pittville Park scheme will help to retain this accreditation. The proposal is to desilt sections of the lakes, improve marginal vegetation and stabilise eroding banks. This will improve habitats, water quality and the environment of the lake.

We continue to improve and maintain the park for the benefit of park users and the environment.

The proposed work will:

Work is being carried out between January and March 2021.

See the location plan and more details in the proposal.

All the desilting and habitat improvements were undertaken on time and in budget. The areas will take time to establish and they will be regularly monitored. We have already identified areas where dogs and people are trampling the vegetation. We have installed temporary fencing while the vegetation fully establishes. The wildfowl birds are already appreciating some protection and additional habitats.

This proposal has come about from previous comments and suggestions from the local community and the council’s corporate plan and commitment to climate change.

The green space department would like your feedback on the position of the meadow areas and any other comments. Consider how you use the space for events, playing, travel through and/or around the space.

Have a look at these maps to see the proposals.

The proposal is to:

In developing this proposal we have considered all the cycling and running routes, pitch and putt, football, walking desire lines and other uses of the space.

The benefits of the proposal

Preparations and seeding was completed in 2020. We saw a lovely modest display of meadow species through the summer. These meadows will improve over time and will evolve with the changes in the seasons we are experiencing. Go out and explore what little gems you can see in the meadows.