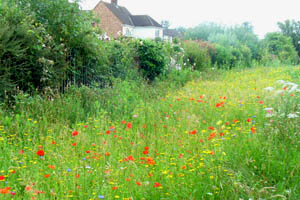 Hatherley Park is surrounded entirely by gardens, some of which have ponds and provide feeding stations for the local garden birds, so the park has great potential to be a hot spot for birds and wildlife.

The mature trees and shrubs which boundary the park provide excellent cover for garden birds and a number of nest boxes have been installed. The seeds and berries are an important food source for the birds and squirrels and these areas are also beneficial to foraging bats, which follow the boundary planting to their feeding grounds.

Flowering meadow borders have been created for diversity and to give a more naturalistic appearance to areas of the park. Seed mixes are sown to enhance the existing planting, with the dual aims of creating colourful impact and also increasing sources of nectar for pollinating insects in the park.

Created in 2005, the pond was planted up with aquatic plant species with the assistance of pupils from a local school. In 2012, the Friends of Hatherley Park secured funding to install the fencing.

In 2010, an aquatic habitat survey was undertaken, demonstrating how quickly the pond had been colonised by various species including pond skaters, damselflies, frogs and newts. In addition, a log pile provides over-wintering for amphibians and other insects.

More recently, the wildlife pond area has been reduced in size in an attempt to prevent mare's tail from becoming established. The membrane and bark which has been used to cover the area will remain in place for up to five years.

Cheltenham Bird Club has been carrying out bird surveys within the park since November 2011. You can look at the table of bird species recorded between November 2011 and December 2012. Volunteers are continuing to carry out the survey in 2013.

We would like to gather more information about the wildlife that visits our parks and open spaces and we are linked with the Gloucestershire Environmental Records Centre. If you would like to record any sighting of wildlife which you have seen during your visit you can do so on their website.