History of the gardens

Jenner Gardens is the name given to the graveyard adjoining Cheltenham Chapel.

Cheltenham Chapel is a Grade II Listed Building.  It was built in 1808-1809 in response to a lack of sittings within Cheltenham's existing churches and chapels.  To begin with it was non-denominational and both the established Church and Nonconformists shared the building.  The Reverend Rowland Hill, a leading preacher of the day, and friend of Edward Jenner, actively supported the chapel.   As congregations grew, the Anglicans and Nonconformists built their own places of worship and the non-denominational nature of the Cheltenham Chapel's congregation was lost.  Between 1851 and 1857 it was a Congregational Chapel.  The Presbyterians worshipped there between 1858 and 1886, before moving the St Andrew's Church at Queen's Circus.  The chapel was sold to the Salvation Army in 1895. 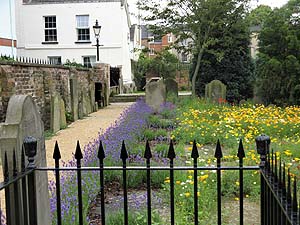 As the years went by, the chapel passed out of religious use and was used as  commercial premises.  In 1987, it was converted for office use.  The graveyard was bought by Cheltenham Borough Council in February 1988.

The graveyard originally extended in front of the chapel building.  When the chapel was converted for office use the gravestones at the front were moved into the remaining area of the burial ground to make space for a driveway.  It was also at this time that the graveyard began to be referred to as ' Jenner Gardens '.

During the years when the chapel was used as commercial premises, the graveyard became neglected and overgrown.

In the mid-1980's Cheltenham Civic Society undertook a great deal of work to rescue the graveyard from this state of neglect, clearing away trees, undergrowth and rubbish.

A survey of the graveyard was carried out by Gloucestershire Family History Society (Rawes 1986), recording the location and inscription of each gravestone.  This provides a valuable resource for family history research.

By 2004 the graveyard was in need of attention again.  A number of local residents and business people formed The Friends of Jenner Gardens with the aim of regenerating the graveyard as a garden in honour of Edward Jenner, the pioneer of vaccination, who had lived nearby.

Cheltenham Borough Council produced plans for the regeneration of the graveyard which were met with approval at a public consultation. Planning Permission and Listed Building Consent were granted and fund-raising began in earnest.  The fund-raising efforts yielded excellent results with a total of £70,000 being raised.  This was made up of £40,000 from the Gloucestershire Environmental Trust, £10,000 from the Big Lottery Fund's BBC Breathing Places, £10,000 from The Summerfield Trust and £10,000 from Cheltenham Borough Council.