The Father of Vaccination

Edward Jenner was born in Berkeley, Gloucestershire on May 17, 1749.  At the age of 14 he was apprenticed to Daniel Ludlow, a surgeon of Sodbury, to study medicine.  Following his apprenticeship he became a student at St George's Hospital , London .  He was a house pupil of the distinguished surgeon and scientist John Hunter, who was to remain his mentor and friend when Jenner returned to Berkeley in 1772. 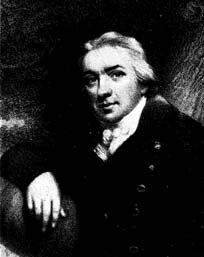 Jenner and his wife Katherine spent the summer of 1788 in Cheltenham , on account of her health, which was much improved by taking the waters.  Seeing the improvement in her health, Jenner wished to arrange his professional affairs so that the summer season could be spent in Cheltenham .  In 1810 he bought No. 8 St George's Place (subsequently re-built ) and lived there between 1795 and 1820.

In 1798 Jenner published 'An Inquiry into the Causes and Effects of the Variolae Vaccinae, a disease discovered in some of the Western Counties of England particularly Gloucestershire, and known by the name of the Cow Pox'.  This book described how smallpox could be prevented by vaccination with cow pox.

Vaccination was actively supported by many of the influential people who visited Cheltenham , then in its heyday as a spa town.  Jenner himself worked tirelessly to see the scourge of smallpox eradicated.  Although awarded many honours, he never became a rich man.  He devoted so much time to vaccination that his business as a country doctor suffered.  He would often vaccinate poor people free of charge.

In 1980 the World health Organisation announced that smallpox had been eradicated from the face of the earth.  Jenner's discovery had saved hundreds of millions of lives and laid the foundation for the science of Immunology

Jenner's research on vaccination to combat the scourge of smallpox was of immense benefit to humanity.  Few people have left so beneficent a legacy.  Apart from when he studied in London , Jenner lived all his life in Gloucestershire.  The county, and Cheltenham , should be proud of their association with him and celebrate his memory.