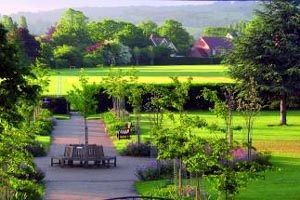 Naunton Park was officially opened on 6 July 1893 and has gone through many transformations since. Today it consists of two distinct areas - a quiet ornamental garden, with a magnificent weeping beech tree at its centre, bordered by cottages and yew hedge - and a playing field and enclosed play area with magnificent views across to nearby hills.

The play area has been refurbished and planted with wildflowers and trees. New benches along the edge of the playing field provide a place to rest and take in the magnificent views from the park.

A pavilion building is used by cricket and football teams, the local youth club and the Allotment Holders Association.

The council works with the Friends of Naunton Park, to improve and enhance the existing facilities in the park for the use and enjoyment of local residents and users.

As a result of this hard work, Naunton Park has been awarded Green Flag Awards twice and thanks goes out to the Friends of Naunton Park for their continued care and interest in the upkeep of the Park.

Travelling  to the park

Naunton Park is not situated on a direct bus route. Two bus routes have stops within a 5 -10 minute walk to the park.

The ornamental garden of Naunton Park has entrances on Naunton Lane. Accessible via Old Bath Road and Naunton Road. A car park is located via Asquith Road.

Asquith Road - where there is: