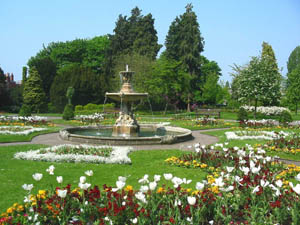 Cheltenham has been described as a "town within a park" and its parks, gardens and tree lined avenues have become nationally recognised as some of the best in the country. The town is also known for the Racecourse with the annual "Gold Cup" and the nearby Cotswolds escarpment, but green spaces within the town are much more diverse than these elements. The provision ranges from small formal gardens and churchyards, to allotments, playing fields, equipped play areas, local nature reserves, and large areas of accessible countryside on the urban fringes. Spaces are also linked by recreational and wildlife corridors such as the Chelt Walk.

Cheltenham has won more awards in the annual Britain in Bloom competition than any other town and recently the authority has also established a track record in securing the Green Flag Award, the national quality scheme for green spaces. The council is also actively restoring and regenerating green spaces through creative use of external funding with recent examples including the restoration of Montpellier Gardens and the new master plan for Pittville Park, two of the towns most significant and historic spaces.

Despite these innovative steps the borough's heritage of green space is coming under an increasing threat through pressure on the green belt, the increase in housing allocations, garden land development and the potential future impact of climate change. A Green Space Strategy for Cheltenham will address these challenges and inform future policy and management decisions.