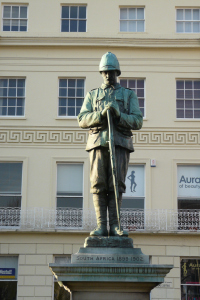 Welcome to Cheltenham Borough Council's armed forces community pages. Here you will find information relevant to current and ex-personnel and their families, reservists, and remembrance of past conflicts.

Cheltenham Borough Council’s formal links with the military began on 2 May 1962 with the conferment of Freedom of the Borough to the Central Flying School of the Royal Air Force. HM Queen Elizabeth the Queen Mother, who was Commandant in Chief of the CFS, visited Cheltenham to mark the occasion.

Nine years later, Central Flying School participated in the Freedom of Cheltenham Parade with their new mascot, Senior Under Pelican Frederick (who had inherited the position from their first pelican mascot, Patrick). After the parade, Frederick was promoted to Pilot Officer.

In October 1986, freedom of entry to the borough was conferred to Royal Air Force Innsworth. This link ceased in 2011 when it was disbanded.