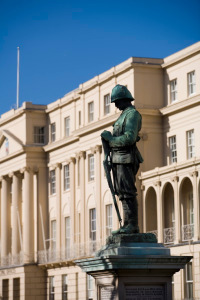 The Royal British Legion (RBL) is the UK's leading armed forces charity and one of its largest membership organisations. Members get together through the network of branches and clubs all over the country and overseas to participate in social, fundraising and welfare activities. They provide financial, social and emotional care and support to all members of the British Armed Forces - past and present and their families. The Legion is also the national Custodian of Remembrance, safeguards the Military Covenant between the nation and its Armed Forces and is best known for the annual Poppy Appeal and its emblem the red poppy.

For information about the Cheltenham Branch office and meetings, visit the website.

SSAFA has been running for over 125 years and is the oldest military charity, providing lifelong practical, financial and emotional support to anyone who is currently serving or has ever served in the Royal Navy, British Army or Royal Air Force.

Volunteers should be available to answer calls and emails Monday to Friday, 9am - 5pm. At other times please leave a message or send an email and someone will get back to you soon.

The HAH HQ is based near Pontypool, but the charity's head of corporate relations, who liaises with businesses which wish to employ service leavers, is based in Cheltenham.

The RNA has over 20,000 members across 370 branches in the UK and overseas, comprising current and former naval service personnel, relatives and supporters of our country's Royal Navy.

Whether catching up with friends at regular social events; fundraising; advising on welfare and employment matters, or just providing an arm around the shoulder, their natural willingness to help others stems from the tradition and camaraderie that only naval service life can instil. Everything they do is inextricably linked to their core values of unity, loyalty, patriotism and comradeship.

The Cheltenham branch meets on the last Thursday of every month at 7.30pm, at: The Navy Room, The Victory Club, Burlington House, Lypiatt Road, Cheltenham GL50 2QJ.

If you or your parents served in Aden, anytime between 1839 and the British Withdrawal on 29 November 1967, either in HM Forces or in a civilian capacity (such as BP Oil, The Port of Aden Authority, Medical Facility, Public Works Department or other Government Office) or if you went to school in Aden or indeed were born within the Protectorate, the branch would warmly welcome you to join them at one of their meetings where you are assured a genuinely warm welcome, which hopefully might lead you to consider joining the AVA which nationally has around 1700 members.

If you are an AVA member visiting the Cotswolds you are cordially invited to join the branch for any of their various events.

The Cheltenham Branch of the Royal Air Forces Association (RAFA) was formed in the 1940s and, today, is one of over 400 branches worldwide. The Branch moved to its present accommodation in 1971, having purchased the building by mortgage, and uses this both for its official functions and as a social club.

The Branch and Club are located in the centre of Cheltenham at 1 Royal Crescent, Cheltenham, GL50 3DA. The telephone number is 01242 524384. The email address is rafacheltenham@gmail.com.

Membership of the Cheltenham Branch is open to all who served or still serve in the Royal Air Forces of the Commonwealth, the Royal Observer Corps or be over 18 and in one of the air cadet organisations. Associate Membership is offered to those who can support the aims and objectives of the Association.

The aims of the Branch are to:

The Branch is run by an elected committee that meets once a month, and the branch and club hold an annual general meeting usually in March of each year.