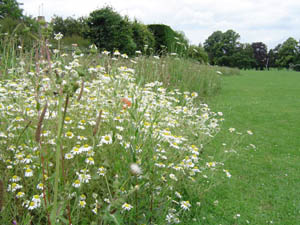 In Spring 2014, work began on the creation of a number of new habitats features on the west section of Pittville Park, close to Tommy Taylors Lane. The area was formerly part of the pitch and putt course which was allowed to grow fallow with minimal maintenance.

At Pittville Park we intend to enhance its beauty by adding a vibrant splash of colour and bringing it to life with an increase in wildlife. Flowers will attract a variety of wildlife; wildflowers produce nectar and pollen for insects and leaves for herbivores including caterpillars, it will inevitably become an attraction bursting with colour and life.

The new habitat will provide a corridor of native cornfield mix of species on either side of Tommy Taylors Lane and a source of food and shelter for a `wide range of wildlife species. The cornfield mix has been chosen to enhance the natural environment of the west side of the park with native species of flora.

Both annual and biennial species are included in the mix as well as a small amount of cereal will be sown too.

The creation of urban meadow area within towns and cities provide havens for many different species of wildlife and also provides an interesting place for people to get closer to natural environment. Included numbers of butterfly, pollinating insects such as hoverflies and bumblebees and small birds that feed on seeds and the small insects.

Over the last decade numbers of pollinating insects and bees populations have declined dramatically. The creation of urban meadows will assist with their survival as well as other species in the food chain. The Bumblebee Conservation Trust has a good source of information on the ways to help with reducing the decline in these important insects.

Did you know that.... a massive 97 per cent (3 million hectares) of wildflower-rich grassland has been lost in the UK since World War Two.

The importance of pollinators

Pollinators play a vital role in the production of various foods, beverages, fibres, spices and medicines that we as humans depend upon.  The commercial production of crops such as apples, blueberries, potatoes and pumpkins are reliant upon the use of pollinators. A continual decrease in them will soon result in a significant impact on everyday life.

Worldwide produce such as chocolate and wines will also become affected as the primary ingredient for these products will originally have come from a pollinated crop.

It is estimated that insect pollination contributes to £400 million per annum to the UK economy.

The project has involved working with a number of different organisations such as Friends of Pittville, Gloucestershire Wildlife trust and a student from University of Gloucestershire.