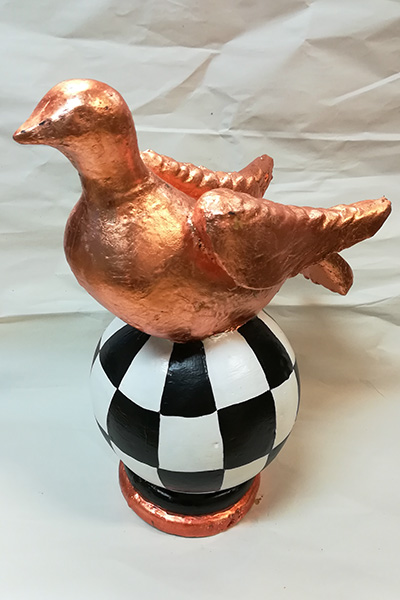 Rachael works predominantly in recycled wire, making beautiful birds out of what would have been considered waste material. She has always felt an affinity with birds and her submission for the Cheltenham Literature Festival 'Who Do We Think We Are?' exhibition in 2018 was a pigeon. She’s aware that not everyone is enamoured by them, but contends that they are such sweet contented souls, just bumbling around and making love at every opportunity that they should be celebrated!

For Rachael, Boots Corner is a very distinctive place. The pigeons still drink at the fountain enjoying the new calm environment (bar being chased by the occasional toddler!). She has artistically wrapped her pigeon in reclaimed copper, which catches the light beautifully. It will also age with the elements and adopt a glorious patina. In light of funding cuts, a lack of ‘Bobbies’ on the beat, and acknowledging Astley Lloyd Blair (the first black police officer in the county), Rachael’s pigeon, also referred to as PC Pigeon or The Copper, will watch over the corner making sure that all is well.

Find this pigeon in Cheltenham town centre using the map below.