Delivering Liveable Streets is important for a range of reasons including mode shift, accommodating growth, improving health and maintaining and enhancing the character of Cheltenham.

Liveable Streets is an approach that will be delivered incrementally. All interventions in the highway should be designed to support the delivery of Liveable Streets.

The characteristics that will make Liveable Streets in Cheltenham are as follows:

The table below describes the link and place characteristics for the different street types that have been identified in Cheltenham. 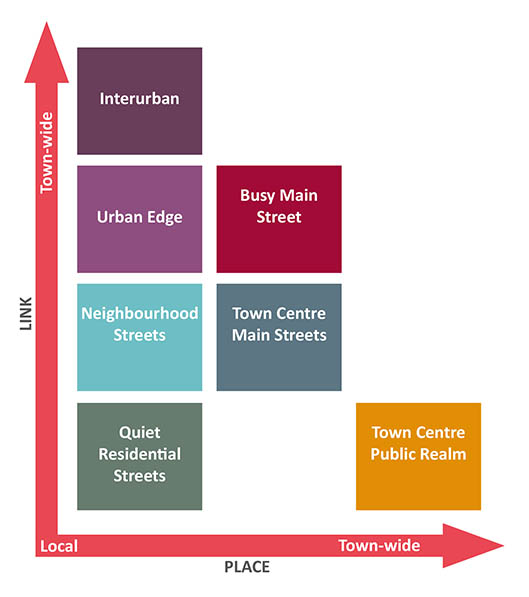 Street types in relation to a link and place hierarchy

The diagram illustrates the street types in relation to a link and place hierarchy. These characteristics can be used to support the development of briefs for any work within streets in Cheltenham. Community led projects are likely to be most appropriate on the streets with lower link functions.

Listed below is our suggested approach to providing cycle infrastructure on different types of street. Good practice guidance can also be found in Transport for London’s ‘London Cycling Standards'.

Full separation on links (such as cycle track and segregated lanes)

Dedicated on-carriageway lanes (such as mandatory and light segregated lanes)

Integration with other vehicles 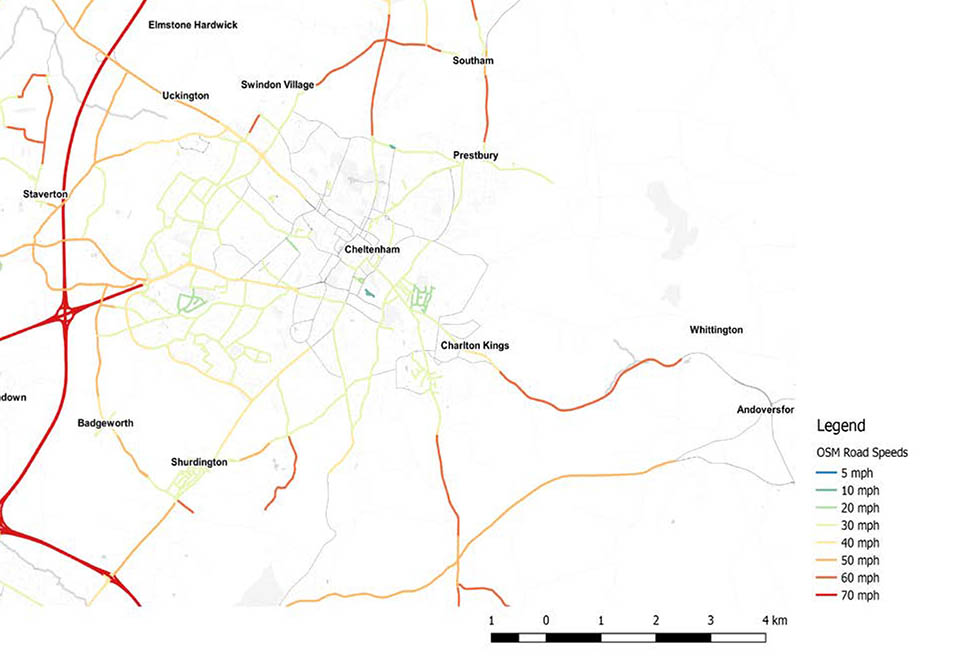 The proposed speed limit strategy is at the heart of the proposed Liveable Streets approach in Cheltenham.

This builds on the street types identified in the previous section.

The speed limit strategy seeks to ensure that:

We expect the delivery of the speed limit strategy to be below £5 million.

If this strategy is delivered in a limited number of stages and as a signed only scheme, we would expect costs to be significantly below £5 million. Cambridge are delivering a similar project in three stages for an advertised budget of £600k. 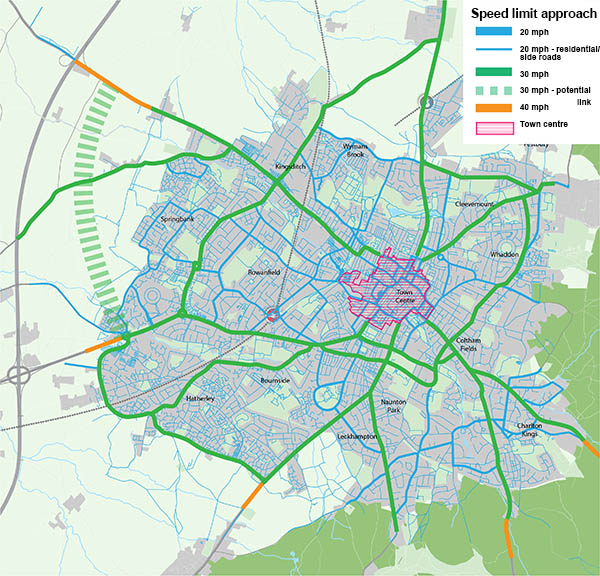 In addition to providing a high quality cycle network (Cycle Cheltways – see below) at the top of the cycle network hierarchy cyclists need to be enabled to travel from door to door on all streets.

This means that there will also be short links, local connections and specific barriers that will need to be addressed by cycle specific infrastructure in addition to the delivery of the broader liveable streets approach and in particular the speed limit strategy.

This programme of works needs to be developed with communities and cycle groups and should be established as a 5 year rolling programme. <£5milion

Providing high quality public realm in key locations such as the Town Centre and Local Centres will be key to encouraging their commercial use and walking and cycling to access them.

A programme of key interventions should be established.

The community have a key role to play activating and humanising local streets through the delivery of events and projects such as play streets, parklets and school streets.

A mechanism for establishing a pot of money and bidding process for communities to bid for funding should be established. < £200k

Regular seating and cycle parking are both critical to encouraging and supporting people to use sustainable modes of transport.

Dropped kerbs are also critical to enabling people moving slowly, in wheelchairs and with prams to move around.

An ongoing programme of providing seating in key destinations and along key walking routes, dropped kerbs and cycle parking at key destinations such as centres and schools should be established. < £200k

The busiest streets can form barriers to people walking and cycling. A programme of providing improved crossing facilities, including side road crossovers, gateways is proposed and dropped kerbs. This is anticipated to be predominantly focussed on those roads which will have speed limits of 30mph or more and are within the Urban Area. <£5 million for side road crossovers and crossings.

These busy streets are also where the most delay to buses occurs. Working to provide bus priority where possible and reducing congestion will help improve journey time reliability and the attractiveness of public transport.