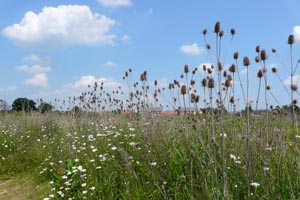 Springfields Park is one of Cheltenham's Green Flag parks, obtaining the Green Flag in 2011.

The park is situated to the west of Cheltenham, lying on the boundaries of Springbank and Hesters Way.

The park is approximately 13 hectares of parkland close to Springbank Community Resource Centre and it has been transformed over the past 6 years.

Springfields Park is close to Princess Elizabeth Way in the Hesters Way area. This Google map shows the parks location and entrances (please note the satellite picture is not up to date and does not show the new landscaping of the park).

You can get to the park on bus route C. There are several bus stops close to most of the parks entrances.

Sports clubs which use Springfields include:

The perimeter of the park has a natural boundary of native dog rose, gorse and fruit bearing plants including red currents, black currants and blackberries. Find out more about the park's flora and fauna.

The park has been divided into two areas with locally sourced boulders from a quarry in the Forest of Dean. These are used to discourage vehicles from being driven within the site. Vehicle barriers have also been installed at the two vehicle access point and the four pedestrian access point have had  barriers installed to reduce motor vehicles from accessing the site illegally.

The gravel track that runs around the perimeter of the site forms a suitable track for dog walkers and joggers to use, the track is approximately half a mile long.

The half pipe ramp is regularly used by the local young people for skating and BMX.

A multi-use games area is very popular with young people as it is suitable for playing football or basketball.

Natural play equipment has enhanced the experience for children to play in the park. The wooden equipment includes a pendulum swing, climbing poles and a number of log bridges across the ditches which forms the parks landscape.