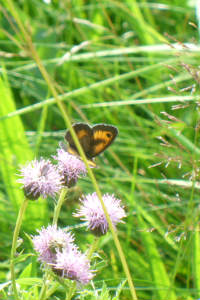 After the development of the new look Springfields Park in 2006, areas of the park were planted with trees and other areas were seeded with wildflower mixes to create colour, texture and interest for people using the park, as well as for wildlife.

The boundary areas to the east and west where houses back onto the park have been planted with scrub species of plants such as gorse, dog rose and bramble, as well as fruit species such as red currants, black currants, gooseberries, blackberries and hazel. These plants provide a source of nectar for the pollinating insects in the summer months and during the autumn a source of food for the birds.

Five large areas were seeded with a general meadow mix such as poppies, cornflowers, teasel, knapweed, vetches and ox-eye daisies. These species provide a display in the early years of the meadow before the perennial species become established.

In the wilder, damper areas, such as around the ditches and ponds, species of plants which can tolerate being submerged or can exist on the margins of water bodies have been planted, such as yellow iris, sedges and water mint.

The features that have been created in Springfields Park have allowed the park to develop into a wildlife haven for a wide range of animals, large and small.

The scrub around the perimeter provides shelter for insects, beetles, spiders, butterflies, birds, bees and hoverflies. Species include: garden spider, ladybirds, shield bugs, ground beetles, bumble bees and most of the common garden birds such as blue tits, sparrows, starlings, blackbirds and chaffinches.

The ponds and ditches provide bodies of open and vegetated water for insects, frogs, toads, insect larvae and snails to live. During the springs of 2011 and 2012 many of the water bodies were full of frog and toad spawn.

During the summer months damselflies and dragonflies can be seen flying across the water surfaces searching for prey. Species include common hawkers, broad bodied chasers and common blue damselflies.

House martins and swallows can be seen flying over the water bodies searching for insects and the house martin land to gather mud for their nests on the nearby houses and resource centre.

We would like to gather more information about the wildlife that visits our parks and open spaces and we are linked with the Gloucestershire Environmental Records Centre. If you would like to record any sighting of wildlife which you have seen during your visit please visit their website.