About the council news 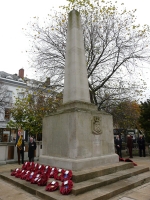 In the centenary year of the Royal British Legion, Cheltenham will reflect, respect and remember all those people who gave their lives for our freedom.

Sub–categories of About the council